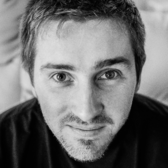 Stay up to date, be part of a community and show your support.

Hello everyone! I'm Sébastien Dubois, your host. You're receiving this email because you signed up fo